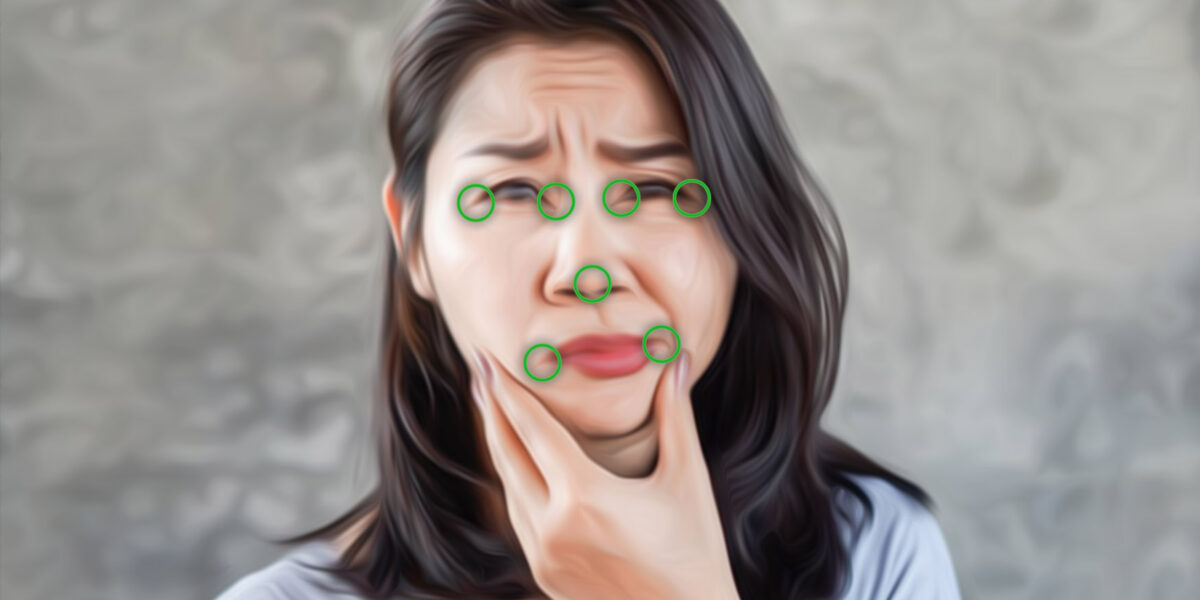 Peripheral palsy and central palsy are two forms of facial paralysis. Both conditions have similar characteristics, but they can have very different acuteness. Bell’s Palsy is one form of peripheral nerve disease, from which patients often heal and which is not likely to be fatal [1]. A central facial palsy, however, can be indicative of a stroke. In this case, it is vital to survival that the diagnosis is made early and that prompt treatment is provided to those patients [2].

In earlier research [3], a system for an automatic palsy classification based on manually defined distances between points of the face was introduced. This system works by executing the following steps in order: 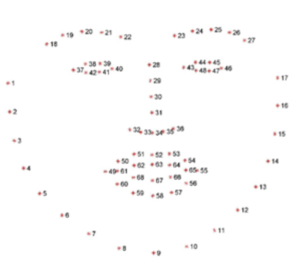 1. A picture of an individual is used as input to the system, the location of the face is then found by a facial detection algorithm.

2. A facial feature extractor finds 68 predetermined landmarks (shown on the right) on the face and records the location (x- and y- coordinates) of each one of these.

3. A deterministic algorithm makes the diagnosis (‘central palsy’, ‘peripheral palsy’, or ‘healthy’), based on predetermined distances between the

landmarks and predetermined thresholds for these distances.

The dataset used in this work, contains a total of 203 pictures found online, which were classified by an experienced neurologist and a neurologist in-training as having peripheral or central palsy, or being healthy. Due to privacy reasons, no new pictures taken in a clinical setting could be added to the dataset. Out of the 203 images, 103 pictures are of patients with peripheral palsy, 40 of patients with central palsy, and 60 of healthy people. For each picture, the coordinates of the 68 landmarks on the face, the output of step 2 of the system, are available. For patients, these are manually annotated, while for healthy people, these were placed automatically. The coordinates of the top-left and bottom-right point of a bounding box around the face region

(“face box”), the output of step 1 of the system, are also available. The dataset as described above is called the “palsy dataset”. [3]

The algorithm used in step 3 of the described system currently works by defining 49 quantitative measurements on the extracted landmarks, and choosing threshold values to distinguish between healthy people and patients, and then between a central or a peripheral facial palsy. Since all images were taken into account to define these thresholds, it was not assessed whether the algorithm works on an alternative image dataset. Therefore, it would be better to replace the current classification algo- rithm with a more robust one that is not based on manually defined thresholds.

The goal of this algorithm should be to classify any individual correctly. Given the data (the positions of all landmarks on a person’s face), a diagnosis must be made (healthy, central, or peripheral palsy). For these kinds of problems, a machine learning algorithm (MLA) can be considered [4]. Since the diagnoses for all individuals in the palsy dataset are known, a supervised learning approach is preferred [5]. This means the training algorithm will use both the features (data based on the landmarks) and the corresponding label (diagnosis) of any data point (image), to train the MLA.

In a similar study, researchers used pictures taken with a smartphone to detect facial palsy. For classi- fication, the researchers used Linear Discriminant Analysis and a Support Vector Machine [6]. This binary classification system, however, does not distinguish between the two possible types of palsy a patient has.

SVMs are a type of MLA which find clusters in high-dimensional data. The data in our datasets consists of up to 136 features per data point. A total of 203 data points are available. This ratio of high complexity to small size of the palsy dataset could mean that SVMs are a good candidate for this problem. [7]

More basic algorithm types of algorithms are also good to consider for this classification problem. An example could be a trained decision tree [7]. Using an algorithm like ID3 to train this tree, in which metrics are used step-by-step to get closer to the final answer, could lead to an algorithm resembling the one proposed in [3].

An expansion to the decision tree is the random forest. This approach uses many trees in parallel to increase higher classification certainty. [8]

The goal of this study was to implement an algorithm to classify any individual as healthy or as having a peripheral or central palsy, by using the relative location of 68 facial features (landmarks) on their face. In machine learning, this is described as a three-way classification problem. The dataset used in our study contains 202 individuals.

Experiments were then run with five different algorithm types, on three different representations of the palsy dataset. Some algorithms were first optimised by varying some of their model parameters and running accuracy tests for each.

The highest accuracies that were reached are 85.1 % using a SVM with a polynomial kernel function of degree 4 on the landmarks dataset and 85.1 % using a random forest with 100 random estimators on the metrics dataset. Both made no errors when an individual is healthy. The random forest on the metrics data seems to be overfitted to peripheral patients, while the SVM on the landmarks dataset performs similarly for both palsies. The highest correct classification rate for patients with a central palsy —the most severe condition— was reached by the Gaussian naive Bayes on the metrics dataset (80 %), while achieving a lower accuracy than the SVM and random forest of 80.7 %.

Dr. Hani Al-Ers
Senior Researcher
Hani Al-Ers is a researcher in the field of human-machine interactions. He completed his PhD at the Delft University of Technology at the Interactive Intelligence group of the Faculty Computer Science (EEMCS). Philips Research in Eindhoven sponsored his project which was aimed at improving the user experience of Philips tv sets. He completed 2 post-docs at the Delft University of Technology, during which he managed international consortia on topics such as an improved quality of life for the elderly. Currently, he is conducting research in the field of health and education and he leads the Research Education activities at the Dutch Innovation Factory.
×
You must be logged in before using WishList. To login click here